Today marked the start of one of the largest and most complex environmental protection projects in in Croatia – the remediation of pit Sovjak in Municipality Viškovo. Sovjak is a natural karst sinkhole in the immediate vicinity of family houses that was used to dump hazardous industrial waste in the period from 1956 until 1990. The pit was designated as a “hot spot” in the waste management strategy and plans, and its 390 million kunas remediation will be managed by the Environmental Protection and Energy Efficiency Fund.

The director of the Fund, Siniša Kukić, expressed his satisfaction emphasising that one of the goals in his mandate as the head of the Fund was the start of remediation works on pit Sovjak. “This is a complex project and I’d like to congratulate all the parties that were involved in the process so far:  the Ministry of Economy and Sustainable Development that provided EU co-financing, Municipality Viškovo, and all the citizens participating in the consultations and public panels with helpful suggestions to improve the project.” Director Kukić said that by respecting the demands of the local community, the chosen solution was the one that was acceptable to them. “The highest of standards were set in the process of selection of the contractor and we’re expecting them to put in maximum efforts, to act professionally, to comply with all the deadlines and to ensure that all protection measures are in place. During the implementation of the 5-year project, we will continuously communicate with the local population informing them about the course of remediation. We are aware that they will bear the brunt, so we want to be open and available to answer all their questions,” said the director of the Fund, underlining again that the safety of the local citizens was the most important.

His views were supported by Sanja Udović, the head of Municipality Viškovo: “The fact that all procurement procedures have finally been completed and all the contracts have been concluded  means that the remediation will begin at last. The remediation works will be neither easy nor simple for any of the stakeholders in this challenging project, least of the citizens of Viškovo, but once they are finished, we will have permanently eliminated the threat to the environment and all the repercussions that our people have been  enduring in the last decades. I hope that after the remediation is completed, we will have resolved this ecological problem in a safe and acceptable manner. As the head of Viškovo Municipality, I expect the contractor and the investor to implement the works safely with as little as possible impact on the citizens and the environment, and to comply with all professional and regulatory requirements for remediation.”
The event to mark the start of remediation was attended by the mayor of Primorje-Gorski Kotar County Zlatko Komadina, who underlined environmental protection as one of the County’s priorities. “We were impatiently waiting for the start of remediation of Sovjak pit, which has sadly been a hot spot for decades, and it should be a warning and a reminder to all of us what can happen in the case of reckless behaviour of individuals that just dump the problem into someone’s lap. I hope that despite the complexity of the intervention remediation will be completed as planned and on schedule, meaning as soon as possible because we have been waiting for this for far too long. The amount of 390 million kunas is massive, but not as the benefits for the citizens of Viškovo and Rijeka, and the entire Primorje-Gorski Kotar County, who will finally be able to breathe a collective sigh of relief once we are rid of this “black hole.”

State secretary at the Ministry of Economy and Sustainable Development Mile Horvat also said that today’s commencement of remediation marked one of the key moments for the citizens of Viškovo and neighbouring area since it will resolve a vast environmental problem, which is also one of the most difficult and financially challenging environmental projects in Croatia. He added that the Ministry of  Economy and Sustainable Development secured 85% of resources for the project from EU funds under the Operational Programme Competitiveness and Cohesion.

Maja Feketić, the head of the Sector for EU Funds at EPEEF explained in her presentation the method and the course the remediation will take, announcing that before the first phase of the works starts, the design and obtaining of building consents will take place, together with adjustments to comply with the requirements in the Decision on the environmental acceptability of remediation, along with hydrogeological exploration works. Remediation envisages the removal of the upper layers of hazardous waste from the pit until the hard rock layer is reached that will not be removed as it will serve as an impermeable bottom barrier. The extraction of soft tar should commence at the end of the year, and it should take about two years. During the project, appropriate measures for mitigating negative impacts have been envisaged, comprising the installation of two air quality monitoring stations. The completion of remediation is expected in the second half of 2026, when the area around the pit should be visually integrated into the surrounding environment with an embankment and suitable landscaping. 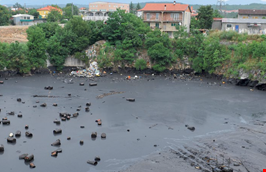