A landfill is a built-up waste disposal site for the deposit of waste onto or into land (underground landfill), including:


Landfills are classified into the following categories:
Remediation of landfills contributes to continuous abatement of the negative impacts of waste on the environment and natural resources. The goal is to reduce detrimental environmental impacts during the entire life cycle of the landfill, especially the pollution of surface waters, ground waters, soil and air, including the emission of greenhouse gases, and to reduce the risks for human health which could arise in the process of depositing waste and the life span of the waste landfill, i.e. the goal is to bring waste landfills to an environmentally acceptable state.

Under the Operational Programme Environment (OPE 2007 – 2013) the Fund started financing the preparation of the documentation for applying the projects for closed landfills (documentation was financed with 100% provided that the project was financed from EU funds. Under OPE 12 landfills were remediated (EU financed 85% of eligible costs, and the Fund the remaining 15% of eligible costs), and a little less than HRK 2.5 million was invested in their project documentation. For the implementation of the projects almost 150 million kunas were withdrawn, and the Fund participated with approx. 25 million kunas.

Financing of closed landfills with EU funding continued under the Operational Programme Competitiveness and Cohesion (OPCC) with 85% of eligible costs, with the Fund providing 10% of eligible cots, and the remaining 5% is financed by the unit of local self-government. As part of the first call for EU financing (closed in December 2018), 23 projects were approved, and under the second call (closed in July 2020), additional 8 projects for remediation of closed landfills were approved. The Fund invested around HRK 7 million, which allowed almost 350 million kunas to be withdrawn from EU funds, while HRK 40 million were allocated by the Fund for co-financing the implementation of these projects.

Image: Landfill Nemetin before and after remediation

The existing waste landfills can be remediated by using either the in situ or ex situ method. The key criteria for the technical solution for remediation include environmental impact (50%), technical features of the location (30%) and economic properties of the location (20%).

Depending on the chosen technical and technological solution, it is necessary to envisage the adequate infrastructure: electricity and water supply, construct the leachate basin, drainage structures, weighbridge, guard booth, erect a fence around the landfill perimeter, construct the fire access road, and plant a high green belt.

This method implies moving the entire waste to another compliant landfill.
The advantage of this method is that the overall waste is disposed of in an adequate manner, while the location is restored to its original state.
A disadvantage of this method is a considerable amount of funding required for remediation in the case of a large quantity of waste or great distance from the compliant landfill that can accept this waste.

The first option in using the in-situ method is to build a new cell next to the old landfill body on the same location, and then all the existing old waste would be moved to the new cell. In addition, after excavation and moving of the old waste, new municipal waste would be deposited on the new cell until the closure of the landfill, which would take place after putting the county or regional waste management centre into operation.

The advantage of this option is the fact that all waste, the old and the newly deposited waste, is placed on the suitably built bottom liner, which completely eliminates the possibility of negative environmental impact of the leachate.

The second in-situ option proposes to build a new suitable cell for municipal waste within the boundaries of the landfill. The old waste would not be moved to the cell but would remain on the present location, and it would be remediated by installing the system of gas wells for passive degassing, covering with the top liner, and planted with vegetation in order to minimise further formation of leachate, i.e. the emission of harmful substances into the environment.

The drawback of the second option is that it does not envisage the bottom liner below the old waste, so potentially there is the possibility of negative environmental impacts of leachate.

A considerable advantage of the second option is that it allows the new cell and the accompanying infrastructure to be built within the boundaries of the existing landfill, so the neighbouring land plots do not have to be need not be acquired.

The body of the landfill comprises:

The bottom (foundation) liner of the landfill body comprises impermeable materials, most often clay, plastic foil, asphalt or bitumen, in order to prevent the leakage of liquids and pollution of soil below the waste. It is followed by the geomembrane, a smooth 2 mm thick surface covered by a layer of protective geotextile which prevents punctures in the geomembrane. Then the drainage system is installed, i.e. the layer with a pipe into which tiny holes are drilled and which is covered with larger gravel. These pipes drain the leachate, while the gravel is there to prevent tiny particles from entering the pipe. After this base is built, waste disposal can start.
The landfill cell cap is built as a composite system of several natural and artificial layers (from the bottom to the top):
LEACHATE DRAINAGE SYSTEM

Leachate is any liquid that comes into contact with the deposited municipal waste. These waters are collected on the bottom liner and through a system of pipes routed to the leachate basin. Leachate is polluted water kept in the closed drainage system without releasing into the environment. Depending on the technical solution, it is possible to recirculate it on the deposited waste or to discharge it in the wastewater treatment system.
The annual quantity of precipitation, estimated on the basis of seepage through uncovered waste, is used to calculate the leachate quantity.

Storm water from established surfaces (green surfaces, capped landfill cells, roof runoff water, roadways) will not come into contact with any type of waste. Storm water is routed through the system of ducts to the storm water basin where it is used as technological water (wheel washing water), or it is discharged into the soil, as appropriate. The waters from the asphalted handling surfaces and the areas for washing the wheels are discharged through the sedimentation tank and treated in the grease and oil separator, and then again used to wash the wheel or watering the vegetation, while any excess is released into the surrounding terrain.

In theory, in the process of decomposing 1 tonne of waste releases around 400 m3 of gas. The gas is formed during decomposition of waste, depending on the composition of waste, conditions at the landfill, and the most intense processes take place in the period between years 3 and 20.
Before putting the top cover into place, the passive degassing system has to be installed in the body of the landfill, where this system comprises gas wells and the pipeline directing the gas to the flare to be burnt.

After the waste is no longer landfilled, chemical and physical processes continue in the body of the landfill and the volume of the deposited waste is reduced, which is conducive to settling and differential settling of waste, and consequently of the top cap layer.
The magnitude of settlement depends on the composition of deposited waste, the method and technology of depositing, height of waste, humidity percentage upon depositing, etc. Fully inert municipal waste, after the completed decomposition processes, reaches the specific weight of approximately 1300 kg/m3.

After the closure of the landfill and installation of the top cover, reference points will be placed on the surface for monitoring the landfill after its closure, where measurements have to be carried out once a year over the period of 20 years.

RECULTIVATION AND THE FINAL PURPOSE OF THE AREA

Recultivation is an attempt to integrate in the best possible way the body of the landfill into the surrounding area. The top cover is recultivated by planting the grass or vegetation that is typical for the environment of the landfill. The future purpose of the area is determined in the physical planning documents. 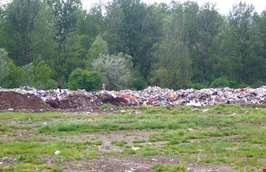 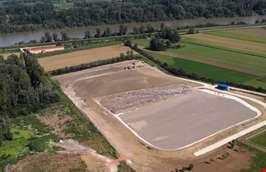 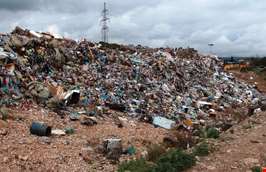 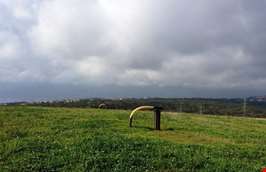